The ‘Āina Mauna Christmas Tree Demonstration Project was the first phase of our efforts to grow locally grown Christmas Trees.  This phase involved importing and propagating seed and outplanting Douglas fir trees on  Department of Hawaiian Home Lands (DHHL) land in Humu‘ula/Pi‘ihonua on Hawai‘i Island.  We originally propagated and outplanted Grand fir and Noble fir, however only the Douglas fir grew well in the nursery and in the field.  We selected these species because they were determined to be non-invasive and deemed desirable for Christmas trees.

The next phase was, “Production & Evaluation of Mid-to-Low Elevation Locally-grown Trees“.  In this phase, we demonstrated that conifer species can be grown at mid-to-low elevations and identified the species and cultivars that produce acceptable Christmas trees – in pots and in the ground.  Outplantings at different elevations was done with collaborators.  This project complemented our higher elevation Douglas fir plantings to help expand a fledgling local Christmas tree industry by identifying a variety of species to replace imported trees at different elevations.  Leyland Cypress (xCupressocyparis leylandii), Norfolk or Cooke Island Pine (Araucaria sp.), Monterey Pine (Pinus radiata) and Cypress species (Cupressus spp) species were grown.  Our goal is that this effort leads to reduced imported container stock; reduced alien species introductions; and reduced workload of State Agricultural inspectors.  Funders for this phase include State of Hawai‘i Department of Agriculture (HDOA), US Department of Agriculture (USDA)-Agricultural Marketing Service, and County of Hawaii Department of Research & Development.

Our original plan was to import seedlings, however we discovered that imported seedlings may carry Phytophthora ramorum (sudden oak death), a soil-borne disease.  Therefore we elected to import the seed and propagate them here in Hawai‘i. Our goal is to demonstrate that top quality Christmas trees can be successfully grown here in Hawai‘i.

Seeds are being imported from the mainland and propagated by Aileen Yeh (Hawaii Agriculture Research Center) at the Division of Forestry & Wildlife (DOFAW) State Nursery in Kamuela, in collaboration with DOFAW Nursery Forester Jacob Witcraft. Outplanting of the seedlings will be done by volunteers.   This web page has been created to document the project and to provide public education about the benefits of planting trees and protecting and perpetuating Hawaii’s forests.

According to the Hawai‘i Department of Agriculture, shipments of Christmas trees from the Pacific Northwest have been found to be widely infested with slugs and other pests that are not found in Hawai‘i. The concern about the heavy infestation of slugs is that they may carry the parasite, Angiostrongylus cantonensis, or rat lungworm, which causes a disease that affects the human brain and spinal cord.  Once an invasive pest or disease becomes established in Hawai‘i, it may have a devastating impact on Hawai‘i agriculture by causing damage to crops and is often costly for the state and growers to control.  These invasive species can be very harmful to Hawai‘i’s unique ecosystems. Providing the Hawaiian Islands with locally grown Christmas trees will support import replacement and promote the “Buying Local, It Matters” message.

Our intent is to show that Douglas fir, Noble fir, and Grand fir are suitable for Hawai‘i production and to establish a protocol and methods to create top quality trees that can compete with the imported trees in our local markets. Douglas fir trials conducted by the Hawai‘i Agriculture Research Center (HARC) in 2002 showed that Douglas fir grew very well at Humu‘ula and at other high elevation sites on Hawai‘i Island and on Maui. We selected Noble fir and Grand fir because they are two other Christmas trees that are popular in Hawai‘i.  By demonstrating that Hawai‘i can grow Christmas trees locally, we can significantly enhance competitiveness of locally gown Christmas trees and provide a viable option for landowners who would like to grow trees on their land.

We would like to bring to Hawai‘i the holiday tradition of getting the family together to visit a tree farm and picking out a Christmas tree. Our intent is that this demonstration project leads to hundreds of acres of Christmas trees on several islands. Just like buying local produce, purchasing local Christmas trees will support local growers.  The local trees will be free of invasive species, unlike Christmas trees imported from the mainland, which sometimes contain unwanted species such as hornets and slugs.  It is our intention to start selling the trees in five to six years.  Proceeds from tree sales will go back into the project for planting more trees, ongoing maintenance, and educational activities and materials.

According to Hawaii-grown Christmas Tree Market Potential, a study conducted by SMS Research and funded by the State of Hawaii Department of Natural Resources (DLNR), Division of Forestry & Wildlife (DOFAW), and the US Forest Service, “In 2012 it was estimated that the total number of Christmas Trees sold in Hawai‘i was in excess of 190,000. Of these, the Hawai‘i Department of Agriculture estimates that 183,000 Christmas trees (96%) were imported.  The remaining approximately 7,500 Christmas trees (4%) were grown and sold in Hawai‘i.”  According to the study, the majority of imported Christmas trees are Douglas Fir and Noble Fir, which are preferred by Hawai‘i residents because of their fragrance, color, and low price. Representatives from DLNR’s Department of Forestry and SMS Research discussed the results of the study and applied them to the potential future for a Christmas tree market in Hawai‘i. The study outlines the pros and cons associated with growing Christmas trees in Hawai‘i and identifies several ways in which a Christmas tree market may be realistic and desirable for both local farmers and consumers. 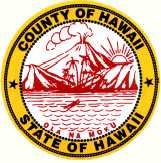 Project Summary
A planting site was fenced and prepared for planting by DHHL.  Aileen Yeh, Hawai‘i Agriculture Research Center; Mike Robinson, DHHL; and J.B. Friday, CTAHR consulted plant specialists with HDOA, DOFAW and the Forest Service regarding importation of conifer seedlings to Hawai‘i.  Due to the possibility of pathogen introduction, and diseases caused by Phytophthora ramorum, HFIA decided it would be prudent to grow the Christmas trees from seeds instead of importing seedlings.  HDOA indicated it was okay to bring in seeds because the disease caused by Phytophthora ramorum is not a seed borne disease.

Aileen Yeh ordered and received Douglas fir, Grand fir, and Noble fir seeds from nurseries in Oregon, Washington, and Vancouver.  She stratified the seeds for sowing at DOFAW’s Kamuela nursery, with assistance from DOFAW nursery staff.   She ran water over the seeds, then dipped them in Zerotol, which is a fungicide algaecide similar to hydrogen peroxide.  Some seeds were from four different provenances of Douglas fir, one provenance of Noble fir, and one provenance of Grand fir from Silva Seed Company in Washington.   Although Silva did not think a Phytosanitary Certificate was required, Aileen asked an inspector to inspect the seeds to make sure.  It was determined that a Phytosanitary Certificate was not required.  The seed passed inspection at HDOA in Hilo.

After evaluating the potential issues of this phase of the project, we expect we can improve on the second phase as follows:

HFIA was awarded a third Hawai‘i Department of Agriculture (HDOA) Sponsorship-Product Promotion grant for 2016/2017.  Aileen Yeh imported and propagated additional Douglas fir seed and worked with DOFAW State Nursery staff to care for the seedlings in the nursery.   On March 3, 2017, 23 volunteers planted 600 Douglas Fir seedlings, see photos here.  See photos and links to video recordings of the March 18, 2016 presentations here.  Forest Solutions Inc. has been maintaining the seedlings in the field.  A second Specialty Farmer Business Training Workshop is scheduled for December 1, 2017.

The next phase of our Christmas tree efforts with include “Production & Evaluation of Mid-to-Low Elevation Locally-grown Trees”.  This project will demonstrate that conifer species can be grown at mid-to-low elevations and identify the species and cultivars that produce acceptable Christmas trees – in pots and in the ground.  Outplantings at different elevations will be done with collaborators.  This project will complement HFIA’s higher elevation Douglas fir plantings to help expand a fledgling local Christmas tree industry by identifying a variety of species to replace imported trees at different elevations.  Leyland Cypress (xCupressocyparis leylandii), Norfolk or Cooke Island Pine (Araucaria sp.), Monterey Pine (Pinus radiata) and Cypress species (Cupressus spp) are potential species.  Our goal is that this effort leads to reduced imported container stock; reduced alien species introductions; and reduced workload of State Agricultural inspectors.  Funders for this phase include State of Hawai‘i Department of Agriculture (HDOA), US Department of Agriculture (USDA)-Agricultural Marketing Service, and County of Hawaii Department of Research & Development.