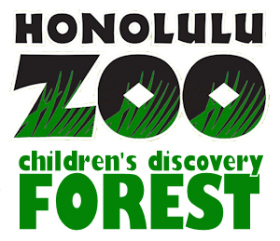 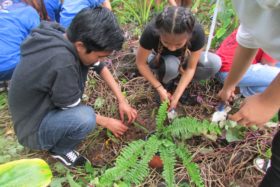 HFI and Hawai‘i Forest Industry Association’s (HFIA) are working with community partners to create the Honolulu Zoo Children’s Discovery Forest.  The Discovery Forest is a representation of natural systems, creating a scene of Hawai‘i before the arrival of humans. The project is demonstrating culturally significant plant and tree species that once grew near traditional shoreline villages of O‘ahu. This replication of coastal ecosystems is helping to provide habitat for Hawaiian plants, birds, and invertebrates. The exhibit is designed to demonstrate culturally significant Hawaiian plant species, the significance of place, and the kuleana of mālama ‘āina by integrating traditional Hawaiian forest ecosystems, forest stewardship opportunities, and innovative land-based education for residents and visitors. Jason Umemoto, Leland Miyano, and Leonard Bisel created the Schematic Concept Plan (See below). If you have a group of volunteers, school group, or boy/girl scout troop that would like to volunteer to help create and maintain the Discovery Forest, contact Linda at Lmduling@hawaii.edu or call 760-695-7460.

In 2019, HFI received grants form the City & County of Honolulu Department of Community Services and Friends of Hawaii Charities for continued site maintenance and to produce a docent workbook, a coloring book, and signage and to install paving stepping stones.

HFI is partnering with faculty and students at the University of Hawai‘i-Mānoa and the State Division of Forestry and Wildlife to improve the native plant collection and educational signs and other materials in the adjacent Kipuka Nene Exhibit to better highlight native forest bird habitat and conservation efforts.

The infrastructure of the Upland Hawaiian Forest Zone has been completed and volunteers continue to enhance and maintain this Zone. Project Coordinator Linda Duling has coordinated efforts to engage over 1,700 volunteers of all ages in maintaining the Discovery Forest and outplanting 1,100 seedlings. An additional 3,224 trees, shrubs, and ground cover were planted in the Upland Hawaiian Forest by the contractor.  We have had individual volunteers; community groups such as JEO Navy, Air Force, Lions Club, Boy Scouts, Cub Scouts, and students from McKinley High School, Kaimuki Middle School, Jefferson Elementary, Waikiki Elementary, Washington Elementary, Lunailio Elementary, Ala Wai Elementary, Punahou High School, UH Mānoa, and pre-kindergarten children.

Plants at the Honolulu Zoo

The Discovery Forest  is reconnecting urban visitors with the Hawaiian forest through three demonstration zones: Polynesian-introduced species and cultivars; Dryland Mesic forest species; and Strand vegetation.  The project is integrating the interest of the community by engaging partners and volunteers in creating the project, which will benefit an estimated 750,000 visitors per year to the zoo. Community involvement is a key component in this project and aesthetic appeal will be valuable for zoo visitors. Wilderness is rarely so organized, and a demonstration garden is an effective way for urban visitors to reconnect with the Hawaiian forest and nature in general.

The project started with the construction of the Polynesian-introduced Zone and will proceed to the dryland and mesic forest and then strand vegetation of the coast; using examples of indigenous and endemic flora. Educational programs are being developed related to topics such as evolution, ecological lessons, endangered species, watershed protection, ahupua‘a resource management, and invasive species. Plants that are associated with educational stories will be prominently displayed. For example, a depiction of a lowland loulu (Pritchardia palm) forest will be a unique feature.

Hawaii’s native forests are our nation’s most endangered, and the lowland ecosystems have been the most severely impacted. By reintroducing elements of the forest, this project will return community rewards in the form of environment and cultural educational benefits, forest stewardship volunteer opportunities, and private and public partnerships.  This special place is serving as an outdoor educational setting where visitors learn about the importance of the sustainability of native and Polynesian plantings within a framework of Hawaiian cultural values. The vast cultural, natural, and historical attributes of Hawaii’s coastal flora and geology is being shared, demonstrating the bond that must be formed between people and ‘āina if both are to thrive.  Honolulu Zoo Children’s Discovery Forest Topographical Survey Honolulu Zoo Landscape Plan 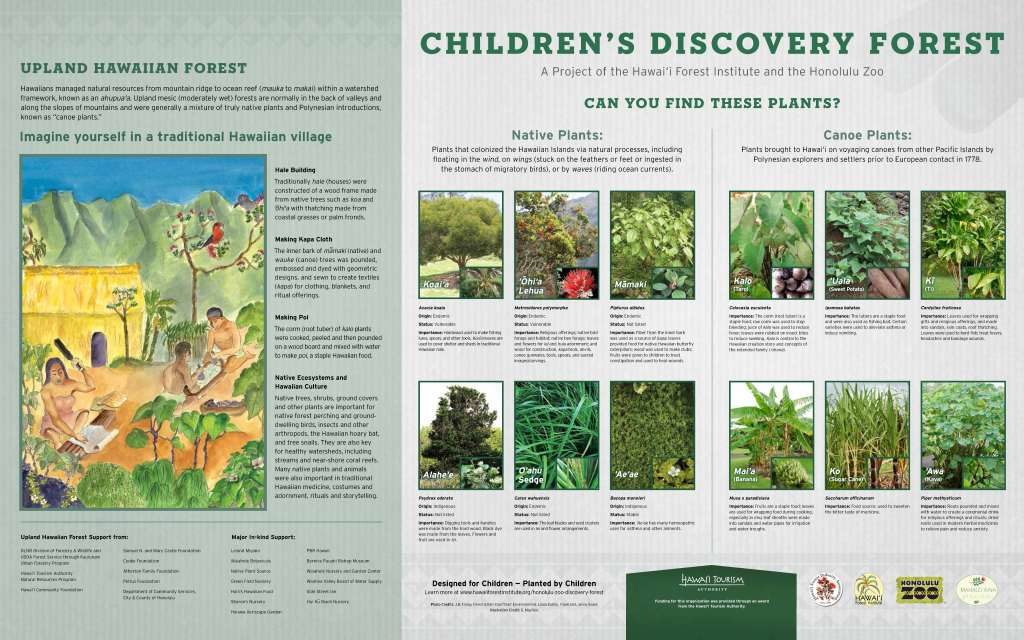 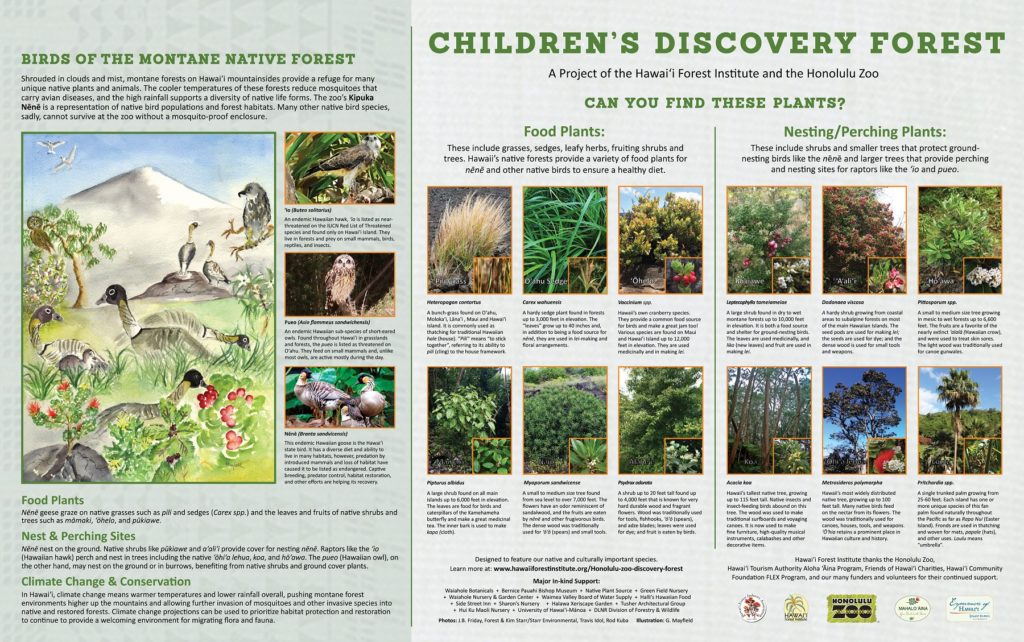 Birds of the Montane Native Forest Interpretive Sign. Illustration by Gerald Mayfield and layout and design by Diana Tusher.

Funded by Hawai’i Tourism Authority and Friends of Hawaii Charities. 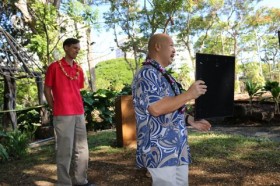 Council Member Ernie Martin presents HFI with a Certificate from the County Council.

A Phase I Dedication was held on February 7th, 2015.  The Dedication featured presentations by Acting Zoo Director Baird Fleming, Landscape Designer Leland Miyano, HFI President Travis Idol, and HFI Treasurer William Yuen. Council Member Ernie Martin presented HFI with a certificate of appreciation and an Hawaiian blessing was performed by Kahu Kalama Cabigon. This was followed by a tour of the site and refreshments. Dignitaries planted Ti plants during the Dedication Ceremony and volunteers planted seedlings in Phase I, the Polynesian-introduced Zone.  Plants were donated by Waimea Valley, Board of Water Supply Halawa Xeriscape Garden, and the Bernice Pauahi Bishop Museum.

A Honolulu Zoo Children’s Discovery Forest (HZCDF) Early Childhood Advisory Committee has been formed.  The mission of the Committee is to provide guidance to HFI toward the creation of educational resources and developmentally appropriate activities at the Discovery Forest that will benefit students in pre-kindergarten through second grade, as well as early childhood educators.  Early Childhood Advisory Committee members are Travis Idol, Sherry Robinson, Leland Miyano, Nicole Evans, and Heather Simmons. The Committee developed potential topics for Hawai‘i Early Learning and Development Standards for four year-old children and Hawai‘i Content and Performance Standard Benchmarks for students in kindergarten, first grade, and second grade. The committee has also initiated the development of activities and lesson plans.

Others committed to assisting with the project include:

Hawai‘i had one of the greatest land snail biodiversities in the world.  One estimate states that there may have been over 800 species in the past.  Today, only a handful are living and those are under constant threat of extinction.  The majority of people in Hawai‘i have never heard of our endemic land snails, and very few have actually seen them.

The Discovery Forest will have examples of plants that were important habitat and food plants for endemic land snails. Surprisingly, the coastal zones used to be the home of countless millions of snails now completely extinct.  Kawelu grass was the preferred plant for Endononta snails at one time.  Higher up in the forest will be Lonomea trees, which formed a habitat for an extremely rare ground dwelling snail that disguised its shell with soil and slime and resembled a clump of dirt.  Under Mamaki bushes many types of snails thrived on half-dried fallen leaves.  Many snails in Hawai‘i often cleaned the forest and did not eat living leaves.  The most famous, Achatinella snails on O‘ahu, are tree snails that eat sooty mold, algae, and fungi off of various tree species.  While there will be no living Hawaiian endemic snails in the Discovery Forest, their stories will live on with the plant species selected and planted.

We appreciate your donation to the Children’s Discovery Forest. 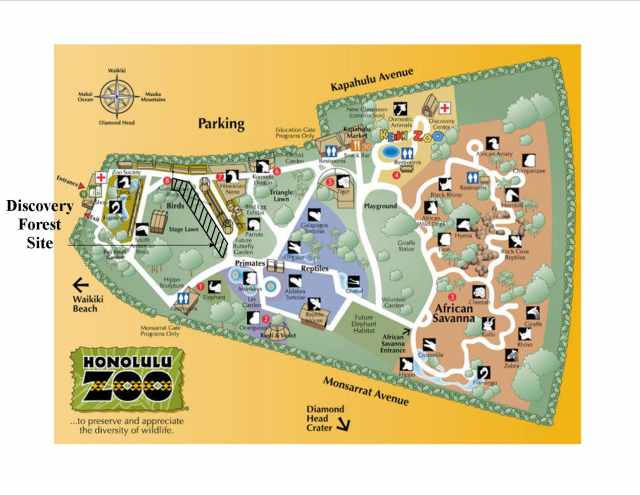